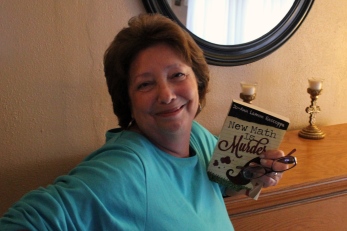 I live in New Jersey and draw on my experience as a freelance correspondent to create oddball characters and unusual scenarios. In addition to hundreds of published articles, my short fiction has appeared in various magazines and anthologies, including the Barnes & Noble Crafty Cat Crimes anthology – 100 Tiny Cat Tale Mysteries. My love of mystery comes from my first influence in the genre – old Alfred Hitchcock movies. Shadow of a Doubt is my favorite Hitchcock film — it was Hitchcock’s favorite, too. I am a member of Sisters in Crime — both Central Jersey and National.

In addition to endless reading and writing, I’m an avid hockey fan and a New Jersey Devils fanatic.

New Math Is Murder is my first full-length novel and the first in the Jersey Girl Cozy Mystery series. The second book in the series, Hide Nor Hair, was released in April, 2015. Another Man’s Poison was released on August 25, 2017.

I am currently do re-writes on a stand-alone thriller – Recurring. Also in the works is a more literary novel, Lesser Saints, as well as a new series – The Boardwalk Psychic: Second Sight.