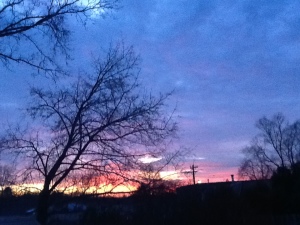 It’s been over a month since I last posted. Between clearing out snow and writing obligations, I haven’t had time to think, dust, or anything else except gain weight and get older. I did manage to find this neat photo though (do I ever take pictures of anything that isn’t in my own back yard?), and love the colors so much that I thought I could at least share this.

In my last post, I mentioned my upcoming blog tour. I didn’t realize that writing guest posts is far more difficult than I had imagined. There is so much to cover, and deciding how to approach it is confusing. Do readers want a description of the new book, tips on writing a series, insight into other things that I’m writing, or even my thoughts about books by other authors?

As you might have guessed, I’m awful with self-promotion. To me, it’s bragging — and that isn’t the way I was brought up. Tooting your own horn was discouraged, almost forbidden in our household. “Nice girls don’t brag,” my mother would say. “Don’t be such a show-off,” my father would tell me, being more direct. So where does a writer draw the line? I’m not sure about that.

I’ve written a few guest posts so far that I thought were pretty good. My editor has already nixed one of them, saying my idea has been pretty much done to death. It was one of those where do I get my inspiration from? –type pieces. I get it, of course. Every guest blogger has done this kind of post and I suppose, after careful consideration, most readers couldn’t care less what inspires me. Still, much of what I write has come from personal experiences and incidents that are based (very loosely) on actual events — which I have learned from my publisher can get you into a whole lot of legal trouble by admitting. Still, these things are my inspiration — like the missing teacher in New Math is Murder, Colleen Caruso’s panic attack as she covered flying lessons for a Town Crier assignment in Hide nor Hair (yes, it really did happen to me while I was up in the sky covering flying lessons for the local newspaper), and tons of other instances in various things I have written. But basing a guest post on these things only makes for one column. What about the other four?

So it’s back to the drawing board for me. I have two more posts to write and three that are finished and need my editor’s approval. I just hope they read well and don’t sound like I’m bragging.