It’s been a while since I posted anything and I’m very sorry – but I have an excellent reason. I’ve been so busy writing and polishing my chapters, as well as gearing up for the conference.

First, Food for Thought is coming along nicely and it’s something I’m reluctant to rush through because it’s more complicated than both New Math and Hide nor Hair. I’m really beginning to like Ken Rhodes’s brother Evan – an amazingly annoying character who makes you either fall head-over-heels for him, or else maybe makes you want to break his charming, ne’er-do-well neck. Second, I’ve been mapping out a new series with a psychic theme and working on the manuscript – and the background stuff is tricky because it’s not in the cozy genre but far more serious in the nature of the crime. Third, I’ve outlined a stand-alone book, Recurring, with a touch of the preternatural as part of the storyline and the subject matter is very dark. I’m over fifty pages into it so I’m committed. That’s a lot on my plate, but that’s okay. Luckily, I’m a BIG eater!

Which brings me to the Deadly Ink Conference and the first night – a panel and of course, Deadly Desserts! Forget about the twenty pounds I was hoping to lose before this gathering of writers began. I only lost ten, and I’m willing to bet I’ve gained seven pounds back after all the food I’ve eaten over the weekend. The Jersey Girls/Boys author panel (see photo at the top of this post) was a hoot – and we’ve all agreed New Jersey characters have attitude, moxie, and a weird sense of humor. 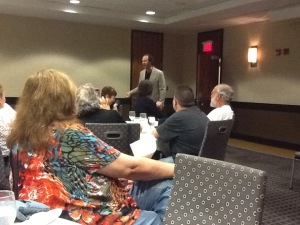 As for the multitude of writers at the conference, Brad Parks (above), author of the Carter Ross series, was the guest of honor and a terrific singer! Who knew? And I had the chance to get reacquainted with Jane Kelly, the creator of the Meg Daniels Mysteries – and who, as we have both decided, is most likely a distant cousin of mine because the Kelly surname is so prominent on the Lamon side of my family. 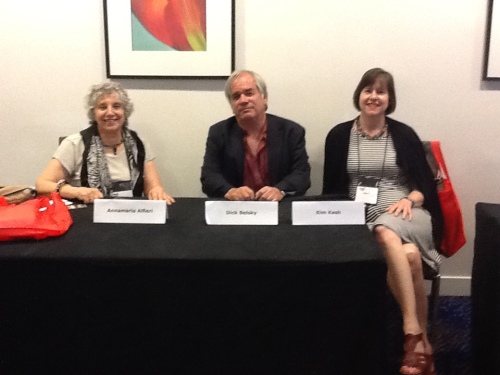 I also met the fascinating Kim Kash, author of the Jamie August novels (another shore gal protagonist whose home base is Ocean City, Maryland – much further south from Tranquil Harbor NJ) and one of the nicest people on the planet. Jeff Markowitz, author of Death and White Diamonds, was also on several of the panels. He’s a great guy with a weird NJ sense of humor, so you can’t help but love him. Annamaria Alfieri, author of Blood Tango and City of Silver, was also in attendance. Not only is Annamaria a brilliant writer and conversationalist, she truly knows how to take a decent picture, even using an iPad (I don’t).

I know I left out a ton of people, but the weekend was a whirlwind of activity and we were constantly talking, chatting, airing our views – oh, and drinking at the bar. I worked on a few gin and tonics over the weekend, Colleen Caruso’s beverage of choice, though I took mine like a man – regular tonic water, not diet!

Three cheers for Debby Buchanan, Chair of the annual Deadly Ink Mystery Conference and Senior Editor at Deadly Ink Press. She did a terrific job coordinating the conference.

That’s it for now. If I’ve forgotten to mention someone, please forgive me. I’m still trying to get back to the day-to-day writing life after a glorious conference weekend.